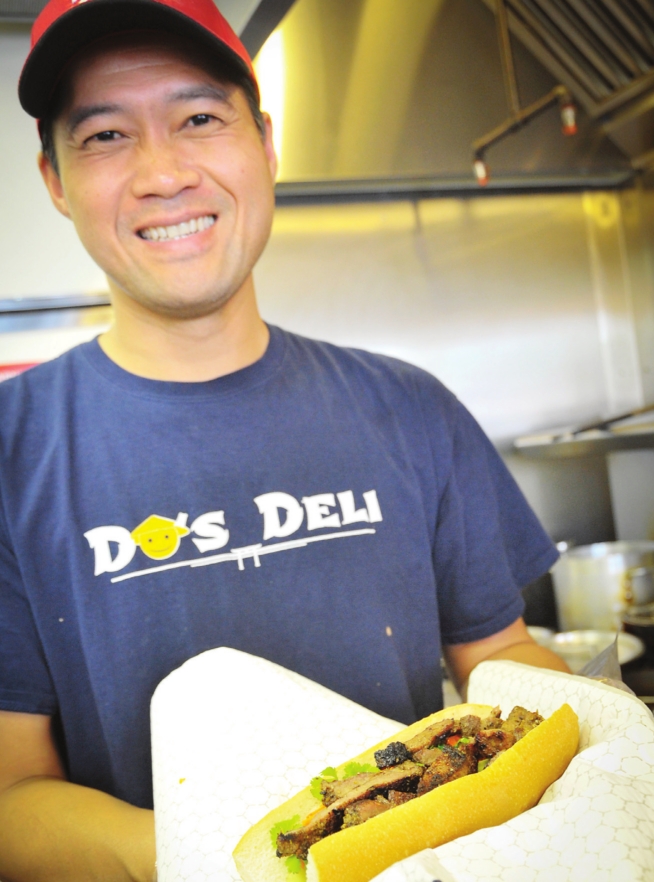 The banh mi arrives in Lafayette, begging the question: What took so long?

Photo by Robin May

Even Son Do, owner and proprietor of Do’s Deli in the South College Shopping Center, can’t quite explain what took so long for banh mi to truly arrive in Lafayette. From Do’s perspective, that of a Vietnamese immigrant and naturalized American citizen, it’s pretty obvious that his culture has done well in Acadiana by the number of noodle and pho shops that have popped up around town like bubbles in a simmering pot of broth. Hearty soups and noodles are something folks around here are accustomed to, but in terms of instant familiarity with ethnic food, the banh mi is a no brainer. It’s a Vietnamese poboy . French bread? Check. Mayo? Check. The perfect vessel onto which your meaty hopes and dreams can be slathered, layered, and consumed? Check. By Do’s admission, the Vietnamese community tends to play a game of follow the leader when it comes to new businesses and ventures. But for whatever reason, few have made the obvious move to the culinary intersection of Louisiana and Vietnamese cuisine: the poboy . And only Do has put it front and center.

“The thing with Vietnamese people is they kind of follow what everybody else does. First they open up a pho shop. The [Mae Sone] Noodle House. And it did pretty well. Then they open another noodle house. Banh mi was slowly getting to be popular. You see it on Food Network. So I thought I should at least try it and see how people gravitate to it,” says Do.

Genius is sometimes doing the obvious thing that everyone else overlooks. Maybe it’s a stretch to call Do a genius for opening a banh mi shop in a town that loves meaty sandwiches, but I love banh mi enough to saint the man.

Do grew up in Opelousas, fleeing the fall of Saigon to North Vietnamese forces with his parents and 11 siblings in 1975. Like scores of Vietnamese refugees scattered around South Louisiana, the Dos adapted quickly to Louisiana life, finding familiar

values in the tight knit, family-oriented and easy-going Acadiana lifestyle. Watching his mother cook family dishes from Vietnam and sharing Cajun dishes brought over by neighbors made Do conversant with two disparate worlds touched by French colonialism.

After leaving a 15-year stint as a chemistry professor at UL, he searched for something to invigorate his life. A quick stab at petroleum industry work yielded no passion. A return to teaching, this time at the high school level, didn’t fit. Meanwhile, Do loved cooking for friends and family, boasting a wide repertoire fluent in both Vietnamese and Louisiana cooking styles.

“I like serving people. Whenever I have gatherings, I cook for them. People seemed to enjoy the food. I enjoyed that. I do pho. Cajun food. Étouffée. Sauce piquante,” he brags meekly through a smile. “I do everything.”

Talking with Do you get the impression that he could just as well have opened a clothing boutique with a shrug. On a whim, he decided to open a restaurant serving his interpretation of the traditional Vietnamese sandwich. The theme is simple: hearty, healthy Vietnamese cuisine served up on a loaf of Poupart’s french bread. Do explains that Poupart’s was the closest he could get to the traditional Vietnamese roll, itself a lighter, airier variety of french bread.

Do’s recipes show a love for the Vietnamese style of grilled, lean meats with a flair for Louisiana spice and playfulness. Growing up in both worlds, it was a natural extension of what Do experienced as a unity between culinary traditions. Do’s Deli is a starting point for the next chapter of his life, one in which he hopes to bring his flavors to fullservice cuisine. In the meantime, he’s a po-boy pioneer even if the map was already drawn by years of harmony between Vietnamese and Louisiana foodways. If he’s right about the Vietnamese tendency to trendset, it could be a great time coming for banh mi lovers in Acadiana. Better late than never.